My grandpa had these old window covers that he was going to “throw down the [crick].” There are too many things wrong with that statement so I decided to take them off his hands and make something out of them. For the first set, I transformed them into picture racks. For the next set…outdoor plant hangers!

Today, I held our first maker fashion show. Though I didn’t get the volunteer turnout or the participant turnout I had hoped for, all created and all made. And, that was the goal and should always be the goal. I kept it open, minus a few ideas, for creation. The result: many  masterpieces I never dreamed of.

Today, I spent the day making and learning by making. Though I’ve been a longtime believer in learning by making, I enjoyed spending time doing what I believe. Takeaways: Why do we teach the Haiku and not question it, but we question teaching programming in schools? If you teach English, be writers, don’t just learn about writing. If you teach science, be scientists. Be rather than do.

Today, I hosted our first of two October monthly maker parties. The focus: custom shoes and duct tape costumes/accessories. Today was the middle school students’ turn so I was welcomed with plenty of enthusiasm to go around. With the excitement and creativity, my enthusiasm runneth over.

Today, I finally installed my paneers and rack on my cruiser. With several parts on back-order, I had to delay my overhaul of my bike, making it ready for commuting. So, today, I’m thankful for a project completed – even if it took weeks!

Today, for my tinkering fundamentals course, I sewed circuits. Though I’ve done some work with Lilypads, it was fun to try it all again. And, after seeing technolojie.com, I’m inspired to try some new tech-infused artwork!

Today, I caught up on some tinkering…with the help of my kitten, Maggie. I’m thankful for the opportunity to build and explore motors, drawing materials, and recycled goods to produce simple circuits, machines, and art.

A year ago, my boyfriend showed me this thing called a “loot crate.” It was love at first sight. The thought of receiving monthly kits to keep you energized is brilliant. The only thing that can be a catch for some (especially teacher budgets like mine) is the price tag. And, while it is not steep, it does have a cost. So, for that reason, I withheld making any purchases.

However, recently, my boyfriend shared a YouTube series with me called “Smarter Everyday.” As an educator, I enjoy the quick segments, humor, and intellectual growth. At the end of the episode, the show’s creator featured Kiwi Crate. Immediately, my attention was perked. Another crate? Say what? And, better yet, if you clicked on his link, you would receive a trial month for free (while plus $4.95 shipping & handling). As an aside, when I signed up for a trial, it did get my credit card info, so I will have to remember to cancel if I can’t afford or if I don’t like. Though I understand the business of it, it is a drawback for some. After the first month, it is $19.95 a month for each crate. Though, if you go to Kiwi Crate, you can get it for $16.95 a month if you pay upfront. In the end, the price is roughly the same.

There are four crates to choose from – koala, kiwi, doodle, and tinker. Koala and kiwi are for younger children, but the doodle and tinker crates are for “children” ages 9 and up. So, I signed us up for one of each – a tinker and a doodle.

Now, I’m perfectly capable of searching Pinterest and starting these ideas on my own (and as any of my close friends can tell you, I do). However, the simplicity and consistency of the crates have huge appeal. Imagine making your own in your classroom – having a surprise monthly crate to challenge your creativity.

So, I signed up for both the doodle and tinker crates. When you love making as much as I do, it’s hard to choose. Then, I began the waiting process. When you first subscribe, the crate ships within approximately 3 business days of your purchase. Afterwards, your crate will arrive mid-month for every following month. Since you are required to create an account, you can login to your account at anytime to view the status of your order. I also discovered it’s a way of finding the specific type of crate you’ll be receiving. For instance, it shows that I’ll be getting the drawbot for my Tinker Crate. And, it was correct!

Approximately one week after I signed up for my creates, they arrived on my front porch!

When I first had the revelation to blog about my crates, I didn’t account for the time to create. Foolish me! So, this is part one of two on the kits. The focus: the Doodle Crate.

I opened my box and discovered a pamphlet on what I would be making and how I could make it. I also found carefully packaged items to use in my creation process. And, I discovered the box itself works as an awesome canvas for creating. 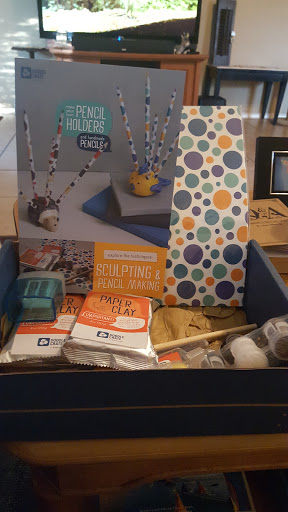 This month’s focus is on crafting your own pencils and pencil holders. It came fully stocked with paint, two types of paint brushes, two packages of paper clay, gloss finish, glue, paper for pencils, and colored led. Oh, and a tutorial book!

Next up – creating. I decided to make the pencils first since I knew I’d get messy with the clay. The creating of the pencils was rather simple. However, the creation process was great for stimulating ideas.

To begin, lay out piece of paper and fold it one inch from the bottom.

Then, put a line of glue along that line (unfold first).

And, place the led on top of the line of glue. 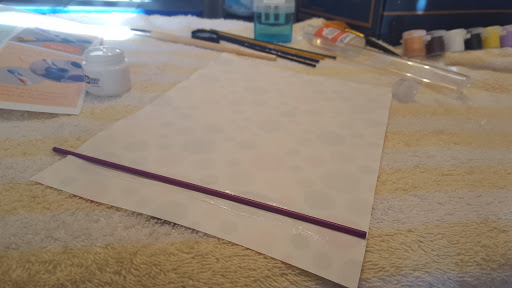 Roll the paper over the led and crease a hard line around the led.

Finally, repeat gluing and rolling the paper until you reach the end and place a final line of glue.

Allow to dry – about an hour – and then, you can sharpen the pencils in the accompanying sharpener. This is where I was unable to follow. I found the sharpener did not sharpen the pencils the way the pamphlet showed. So, I’m going to go back to this and try again, as all makers do.

I also decided to dip my pencil ends in colors to correspond with the led, per the pamphlet’s suggestion.

Next up  – the clay sculpting process. Though I create all the time, it had been a while since I used paper clay. I discovered I used too much water. I also morphed my creatures into fantasy characters since they did not appear the same as their lovely drawings. This, too, is part of the maker process – remember the process and not just the product.

I failed to document the creation process since my hands were fully covered in clay. However, remember to keep a tower and cup of water nearby. The pamphlet covers this as well.

After you finish creating your two figurines (or, you could do one large one – I wish I had) and punching in holes to use as a pencil holder, you have to let your clay dry overnight. Mine was so wet, I let it dry two days.

Then, you can paint. The paint dried in under 30 minutes. Finally, coat your figurines in the supplied gloss for a clean finish.

With all things maker, it’s important to document your creative process. It’s never just about the product. The product is a fun gift at the end, but it is not the most important thing. Challenge your students to document their work! 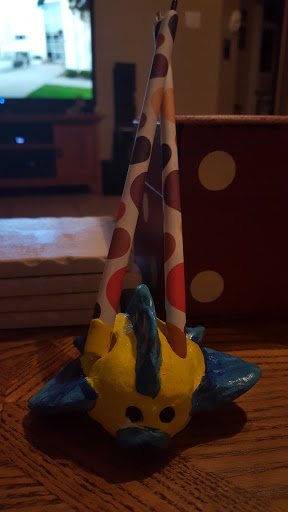 Since I have not tried my Tinker Crate yet, I don’t have a preference. I do believe they target different skills. This targets the creative process. While, Tinker Crate is more problem-solving. If you can, I’d suggest doing both!  You can also go onto the Kiwi Crate Website for suggestions on ideas to try and ways to do these on your own.

This year is our first year of having makerspaces on campus, so it’s a year of recruitment and a year to get others interested. With that in mind, I spent the first few months of the year securing spaces and resources. By December, I was ready to bring in students so I started with a maker party – code your own ugly sweater or upcycle an old book into a purse, tool box, or other accessory.

As more students and faculty use the space, I’ll have to solidify a few basic rules and offer some training courses on the tools. But, for now – for this first year – it’s about engagement and recruitment.

So, I decided to finish off 2016 with monthly maker parties open to all students and staff during open lunches (a time when students are not required to eat in the dining hall and teachers do not have duties). For January, I hosted a Makey Makey challenge and a light saber creation event. I split up middle school and high school students for more personalized events and better crowd control.

Today, the middle school students entered – 15 of them (we only have 200 middle school students) ready and armed to make. I assumed all were in for the light saber creation, but was pleasantly surprised when several girls asked to explore the Makey Makeys. Some even asked if they could complete some of the projects from last month.

We began with an introduction of the space and how to use it most effectively. This was an important step in this makerspace since the space is rather small and has not been fully defined for maker.

After a brief introduction to the space, we were ready to create. I found this great Instructables tutorial previously (which I still recommend consulting), which I used to guide the maker event. Before sharing this with students, though, I made one myself. ALWAYS make one yourself first.

First, gather the supplies. I sectioned mine off into various corners of the makerspace for better traffic flow.

Next, it’s time to get to work! To make best use of the tubes, we cut ours in half. However, in the original example, he only cut off about 12 inches. It’s up to you.

Then, cut the wrapping paper rolls. We measured from the base of our hand/top of wrist to the tip of our middle finger and cut. This will be the shaft. 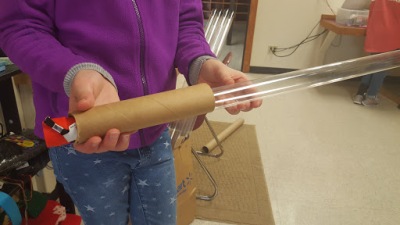 Then, we removed the black plastic covering at the end of the tube. In it’s place, we placed a piece of duct tape (sticky side up) on top of the hole (leave a little on the sides so that it hangs out – you’ll clean this up later). Then, we put the plastic covering back on, securing the duct tape. To make sure the light does not escape, you may need to wrap electrical tape around the top and sides of the plastic covering. I had to do this for mine and so did the students.

Now begins the aesthetic stage. I put duct tape over my wrapping paper shaft for cosmetic effect. It was not necessary. I also put electrical tape at the end and top of the shaft to secure it and make it look more polished. In this step, you can cut out the peel and stick foam to add grips to your shaft. Be creative and have fun.

In the final step, we colored the tubes with permanent marker. And, then, we used a low grade sand paper to sand down and diffuse the color. This helped diffuse the light.

Now, your students are ready to wage light saber war. And…hopefully, this will help jump start your makerspace. The key is finding topics that catch your students’ attention. Here is a list of our maker parties for reference.